Book of Mormon Names and Places

represent the views of BMAF or The Church of Jesus Christ of Latter-day Saints.

Musings on the Making of Mormon’s Book: 1 Nephi 17

by Brant A. Gardner

Kaminal Juyú Stela 10
Coronation of Limhi -- The Abinadi Story
by

THE ROLE OF CYCLICAL FATALISM AMONG THE MAYA

Quetzalcoatl, White Gods, and the Book of Mormon

by Brant A. Gardner

The Aztec deity Quetzalcoatl has entered public consciousness as the “white god.” The very fact that a Native American people would have a bearded Caucasian deity has led to widespread speculation about who might have been the real person about whom the legends developed. The earliest speculation came from some of the Spanish priests who first encountered Aztec religion. They believed that the original bearded Caucasian must have been St. Thomas the wandering Apostle. Other suggestions have been St. Bernard and Ethan Smith, who published his View of the Hebrews in 1823, suggested that it was Moses.

The LDS speculation has associated the Quetzalcoatl legends with the appearance of the resurrected Christ to the people gathered in Bountiful as recorded in the Book of Mormon. No less a figure than Church president John Taylor, wrote of Quetzalcoatl:

“The story of the life of the Mexican divinity, Quetzalcoatl, closely resembles that of the Savior; so closely, indeed, that we can come to no other conclusion than that Quetzalcoatl and Christ are the same being. But the history of the former has been handed down to us through an impure Lamanitish source, which has sadly disfigured and perverted the original incidents and teachings of the Savior’s life and ministry.”1

President Taylor’s statement recognizes that the Quetzalcoatl legends do not really match what we see in the Book of Mormon, but ascribes those differences to the impure source and time. President Taylor is absolutely correct that over time stories can develop, evolve, and shift away from their original sources. That is actually a perfect description of what has happened to the stories about Quetzalcoatl. However, rather than drift away from the Book of Mormon story of Christ’s appearance into a paganized retelling, they stories have drifted from a pagan story into a Christianized one. The LDS correlation between Quetzalcoatl is more than just a similar attempt to find the bearded Caucasian that we first saw among the Spanish priests, it is based upon the stories that the Spanish priests used to declare that bearded Caucasian as St. Thomas. Unfortunately, while those stories were based on the native deity Quetzalcoatl, they had already been warped into new forms as the Spanish fathers recorded them.

The entire history of the development of Quetzalcoatl stories from native deity to some Christian reformer is one of assumptions modifying data into forms closer to the assumptions. When we do the historical footwork to pull apart the threads of the tapestry, all of the elements of the story that make the bearded Caucasian appear to be Christian are only distortions of the native story—including the idea that Quetzalcoatl was a bearded Caucasian.

How was Quetzalcoatl White? Quetzalcoatl’s statue was always painted black. The artistic representations had visual signals to show that it was Quetzalcoatl (parallel to keys on a ring declaring which figure in a Renaissance painting was Peter). The only time he was “white” was when he was described with his association with the East, which was associated with the color white just as other directions were associated with red, black, and yellow.

“The identification of colors with directions is most fully documented among the ancient Maya, who had specific glyphs for the colors red, white, black, yellow, and green. In the Yucatec Maya codices, these colors are associated with east, north, west, south and center, respectively. . . . Like the Maya, Central Mexicans appear to have identified white with the north and yellow with the south.”2

Historia de los Mexicanos por sus pinturas records an unfortunately abbreviated version of the four sons of a heavenly god and goddess, the four Tezcatlipocas. Only two give their particular colors, and Quetzalcoatl is not one of them:

The oldest they named Tlatlauhqui Tezcatlipoca, and those of Huexotzinco and Tlaxcala, who held this one to be their principal god, called him Camaxtle: This one was born all red.

They had the second son, whom they called Yayauhqui Tezcatlipoca, who was the best and the worst, and he was more powerful and able than the other three, because he was born in the middle of all: this one was born black.

The third was called Quetzalcoatl, and as another name, Yohualli Ehecatl. 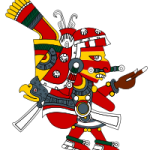 The Aztecs really didn’t see that big of a difference between their skin color and that of the Spanish. Miguel León-Portilla, professor emeritus at the Institute for Historical Research, National University of Mexico, quotes Alvarado Tezozomoc, a native nobleman (who wrote no earlier than 1609, a date found in the manuscript “Mexican [Aztec] Chronicle”): “Their [Spaniards’] skin is very white, more so than ours.”4

Quetzalcoatl became Caucasian because the Spanish fathers recording the tales couldn’t conceive of the association with a direction and assumed that the description must have depicted skin color. It was part of a transformation of native legend that they made into a prediction that the Spanish would come and rule.

The Mulekites And The Phoenician Connection

Dragons in the Book of Mormon
By
Diane E. Wirth