The contents of all BMAF publications are the sole responsibility of the individual authors and therefore do not necessarily represent the views of BMAF or The Church of Jesus Christ of Latter-day Saints.

(BMAF note:  Lyle Smith is both educator and administrator in the Restoration Movement, teaching Book of Mormon classes and traveling as far as Africa to work with Priesthood Retreats for local church leaders.  Book of Mormon references in this article are shown as chapter and verses from the Community of Christ Manuscript edition of the Book of Mormon. LDS notations appear in quotes afterward)

The March/April 1987 Biblical Archaeology Review reported on excavations at Arad, an ancient Israelite fortress located in the Negev Desert about 40 miles south of Jerusalem. “This Israelite fortress at Arad is unique in the Land of Israel. It’s the only site excavated with modern archaeological methods that contains a continuous archaeological record from the period of the Judges (c.1200 B.C.) to the Babylonian destruction of the First Temple (586 B.C.)” (Herzog, Aharoni, and Rainey 1987:17). The last settlement strata, from the ninth to sixth century B.C. is contemporary with Lehi and his departure from Israel shortly before the destruction of the First Temple.

Among the significant discoveries were an Israelite temple (at the time the only other one known besides the one in Jerusalem) and archives with political, administrative, and religious documents in a singular series of inscriptions. Among the large quantity of ostraca (potsherds with inscriptions on them) were a number which featured a “standard opening” phrase—“and now.” This information was presented in both an article (“With Power and Great Glory,” Smith and Smith 1987) and a PowerPoint presentation (“Arad,” Smith 2005).

The archives of Eliashib, the commanding officer at the fortress circa 600 B.C., contained potsherds inscribed with correspondence, supply vouchers, inventory lists, and important military orders. One voucher states,

And now [the standard opening], give the Kittyim three baths of wine….

It then lists the amount of flour to be issued (Rainey 1987:39; see Figure 1 below). Numerous examples at Arad of the use of “and now” as a standard opening testify this was the usual way to commence a written communication after the salutation. 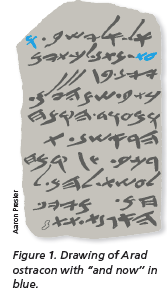 Hebrew Biblical studies support the frequent usage of “and” to begin a sentence, which is also common throughout The Book of Mormon. Further research on the phrase “and now” used as an opening discloses a definite pattern found in 60 of the 114 total chapters of The Book of Mormon (see Table 1 below). Many of the verses in The Book of Mormon beginning with “and now” continue with the well-known phrase “it came to pass.” Most of the remaining chapters begin simply with “now.”

Another factor emerged while searching The Book of Mormon for this pattern. A person’s name or reference to a people usually follows “and now.” (Further study may uncover similar uses in ancient Hebrew.)

And now I, Nephi…

And now I, Mormon…

And now I, Moroni…

Not all of the “and now” phrases open a chapter. Many are scattered throughout the text. A few prize examples are:

Over the years I have seen many archaeological evidences that I believe accurately portray the historicity of The Book of Mormon. By this, I mean they show that The Book of Mormon provides correct information about the people, their language, culture, and history. Joseph Smith could not have known in 1830 about the use of “and now” as a Hebraic “standard opening” in the fifth and sixth centuries B.C. The evidence discovered at the Arad site in the desert of southern Israel clearly demonstrates the narrative in The Book of Mormon is correct for that ancient time period. 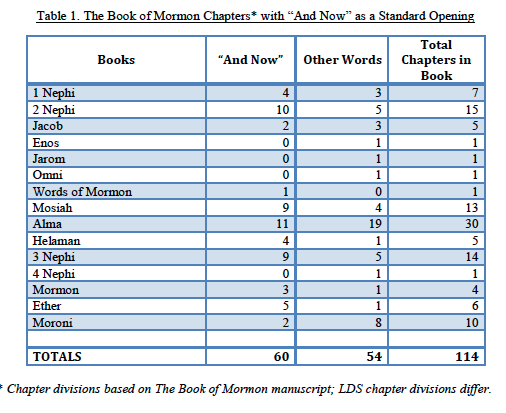 Edits by editor of glyph notes and approved by author.

(Scripture references in brackets are LDS.)